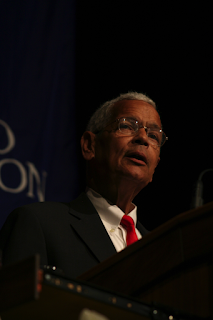 Emilye Crosby helped organize tributes for Julian Bond at the September meeting of the Association for the Study of Afro-American Life and History (ASALH) and the upcoming April meeting of the Organization of American Historians (OAH). Bond, who was a mentor and friend to Crosby, was a founding member of the Student Nonviolent Coordinating Committee, Chair emeritus of the National Association for the Advancement of Colored People, and a well-known advocate for civil and human rights. He spoke at Geneseo in 1968 and gave the Wadsworth lecture in Fall 2007.

Julian Bond speaking at the Wadsworth lecture in 2007 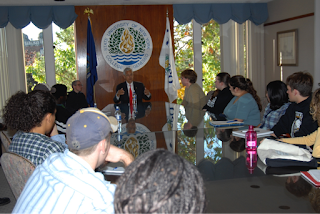 Julian Bond in a seminar with Geneseo students in Fall 2007